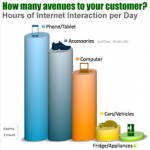 The world’s most popular open source CMS, WordPress, now ships with a free plugin to do A/B testing, Behavioral Targeting, Subscription Billing, Social Integration, Load Speed Optimization and Search Engine Optimization with a few easy to find and integrate plugins. As a result of this boom in the base level of technology that is available for free, open source and instantly accessible to everybody the platform conundrum finally has a base level of vocabulary. Simply put, if your platform does not allow a holistic gamut of functionality as a starting point, it’s outclassed before you can even begin to discuss the actual price of the products or services on offer. What’s interesting about the development stack, when you include search, is that all of this technology comes equipped with very little data based intelligence integration into these pieces. So what you have is the best foundation in the world, but no more structure than that out of the box. Leading companies already include a data layer as part of their offerings. If you can identify the data layer that has the biggest possible network effect out of your platform, you’ll end up the default in the new “open data layer” that’s all around us.

The main thing that Bing and Google are doing is integrated third party data sets into the main results, making them more interesting, rich, meaningful and able to answer a broader set of intentions today than they were able to do even two years ago. Most of this is done through open data offerings, but rich media that allows websites to further customize their search engine listing are getting more and more prevalent all the time. Facebook has open graph tags for sites to improve their listings, traffic and categorization in that index. These digital examples are only a small slice of our time, as we’re not yet a hundred percent connected to the network.

Now take the idea one step further, with the self driving cars all sending information to and from Google Inc. Or the Iphone sending your data to Apple, Inc and helping to drive the creation of a three dimensional map of the world based on so much real, physical presence. Now Apple has announced Siri as a button is integrating into Cars and automobiles. If you read my book, Be Transformative, you would notice a chart showing “How many avenues to your customer?” The chart from the book shows that each of the main categories of things you interact with is soon becoming a node, in the global network.

One thread from all of these integrations into the real world, even Google’s Project Glass, is that they aim to aggregate and deliver a ton of data for re-use through a commercial API. In other words, we’re all helping to build the global knowledge graph, with very limited ways of opting out and the very act of opting in, while it drives commercial value, offers up too much convenience for all but a small minority even selecting the global opt-out of this passive syndication of personal data.

The constantly aware network of brands and companies that have the largest reach today in terms of time spent, are all creating partnerships and deep integration all the way down to your vehicle. Iphone jacks, Siri in your car dashboard, Google Voice Directions helping you while in a few years, Google Car Driver chauffers you along to your voice given designation. The foundational data layer that each of these companies is integrating into their products and services is based on real world people, patterns and usage. Every time a new product line is developed, careful attention is paid to how might this product enable the leading company to extend their graph of movements, traffic, people, real world relationships and more.

As an Iphone family, could Apple not opt all of the immediate family members I have, along with most of my extended family and even my friends, into one big social network? Eventually they could give us birthday reminders, and prompt us, via text from Siri, to get the right present for the right person. That way if my sister was talking about a certain book on a social network, perhaps I might be reminded that she needs it.

The company which might pull this off is Google, so far, with their project glass. They now have an excuse for constant two way broadcasting data from the perspective of a user with integrated audio, visual and geospacial feedback. Including the ability to do voice and face recognition, geotagging of objects and cross referenced search into your personal history in Gmail and offline as well, the Project Glass could essentially, “optimize” based on their PageRank algorithm the most likely list of things you, personally, should do at that very moment based on your intentions, personality and probability. Ok if I think about all the possibilites I do get extremely excited but also a bit creeped out. Do you remember a few years ago, when then Google CEO said, “We’d like to be able to recommend what you do that day.”

With Project Glass, Google just might do that. Siri will from Apple, and perhaps Samsung will leverage it’s growing network effect as the largest in many types of electronics and other categories will jump into the data layer development category via some acquisitions like Nuance, the speech recognition firm, and Blekko, the search engine startup. The fascinating aspect of the whole data layer notion is that it extends into the real world in a way that some of the current, most popular open source softwares such as WordPress are invisible in the interaction, merely being one kind of pipe through which a set of data flows into your Google, Apple, Samsung or perhaps Nike device. So the current set of open best practices and technologies that are used for the desktop and mobile web will still be used even in the far off future. However, increasingly all of these will be augmented with an extended set of open technologies combined with an exponentially increasing amount of data sources and inputs, both free, customer driven and commercially available.